British DJ/producer George Fitzgerald witnessed the birth of the dubstep scene during the mid-2000s, working at London shop Black Market Records and being a part of the city’s vibrant club scene, but he didn’t begin releasing music of his own until he moved to Berlin in 2010, when Paul Rose (aka Scuba) signed Fitzgerald to his influential label Hotflush Recordings.

Fitzgerald pursued music as a full-time career, releasing moody, melancholic R&B-influenced club tracks, starting with “The Let Down” 12″ on Hotflush in 2010, followed up by “Don’t You” (also on Hotflush) and “Fernweh” on his own ManMakeMusic in early 2011. By the end of 2012, Fitzgerald had additionally released EPs on Aus Music (Silhouette and Child) and Hypercolour (Needs You), remixed Jessie Ware and Throwing Snow, and completed DJ mixes for Resident Advisor and XLR8R. In 2013, Fitzgerald contributed to BBC Radio 1’s Essential Mix series, and signed with Domino sublabel Double Six Recordings, issuing singles “Magnetic” and “I Can Tell (By the Way You Move)” by the end of the year. Fitzgerald’s music began to evolve into a more analog-based techno/house sound, rather than the U.K. garage-influenced style of his previous work. Personal issues, such as a failing relationship and disillusionment with the club scene, delayed the production of his debut full-length, then ultimately inspired it; Fading Love, featuring guest vocals by Boxed In and Lawrence Hart, finally arrived in 2015. ~ Paul Simpson, Rovi. 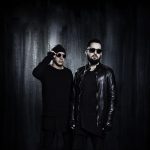